In Case You Don’t Know of SnapChat 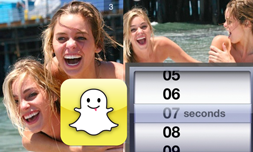 Students are flocking to SnapChat but it’s giving them a fals sense of security.  For those that don’t know what SnapChat is, it’s a mobile application that allows users to do real-time picture chatting. You may think this sounds just like Instagram, but the images that the user sends are “self-deleting.” If anyone remembers the tv cartoon “Inspector Gadget,” may recall “this message will self destruct,” this is the same thing but for images sent on mobile phones.

It cannot be contested that SnapChat is popular amongst the youth, especially as it’s listed as the 6th top free mobile apps on the apple store and 33rd on the Google Play Store.  When delivering my social media safety & responsible posting edutainment presentation at school assemblies I always take a quick poll to see what the students are using. It seemed like overnight that when I asked the students, “who uses SnapChat?” and a sea of hands flew up in the air.

However, most students think that because the image will self destruct, they can send any image at all and it won’t “get out,” but this is not true.   When talking to students about this App, Gmail sign in the students bring up the fact that they can take and share pictures with people that they wouldn’t have normally shared, because the image will delete itself. These images may not just be silly, but sending images that are sexual in nature, nude or semi-nude (basically SnapChat sexting),  or other inappropriate images for that matter that could ruin student reputations. To give you an example of this, a tumblr blog called, “Snapchat Sluts” put out a request for salacious shots on twitter and got an overwhelming response.

What student’s need to be taught is that no matter what, before posting anything online, treat it as though everyone is going to see it. When I mention this during presentations students are quick to say “Well what about SnapChat? It deletes my photos.” This is when I bring up how although SnapChat deletes your photos, there is nothing that prevents someone from taking a screen shot, or taking a picture of their display with another phone. It is usually at this point where they stop, think, and become silent.

In conclusion when talking about posting images online, here is the test that students can use to determine whether or not the image should be posted. Have the students imagine themselves driving down the road in a car with all of their loved ones that care about them (parents, grandparents, other family members etc). Image driving on the road and everyone in the car looking up and seeing the image you want to post online on a billboard. If you’re embarrassed by having everyone see the photo, don’t send it, but if they are alright with it, then feel free to post it.